November 2019 is the first month of what might become an annual challenge - #nodevember. This is a challenge where each day of the month has a theme. You use Blender to create an image using only the default scene and material nodes - no modelling. More details can be found here Nodevember.io. You can see the results of my efforts here and also on my Facebook and Instagram pages.

Acrylic prints are available in A2 and A3 sizes.

The Print Shop is now open

Paper prints of several of my images are now available to purchase via the FatCuckoo website.

Head on over to the shop page to see what's available. The paper prints are available in four sizes, A1 through A4, and with free next-day delivery for UK customers.

Well twelve months has passed since my last post here and lots of things have happened in the intervening period.

The main event was the commission for the Corner House restaurant in Wrightington.

You can read more about it here: www.blendernation.com/2015/09/14/creating-a-large-print-for-a-restaurant/ 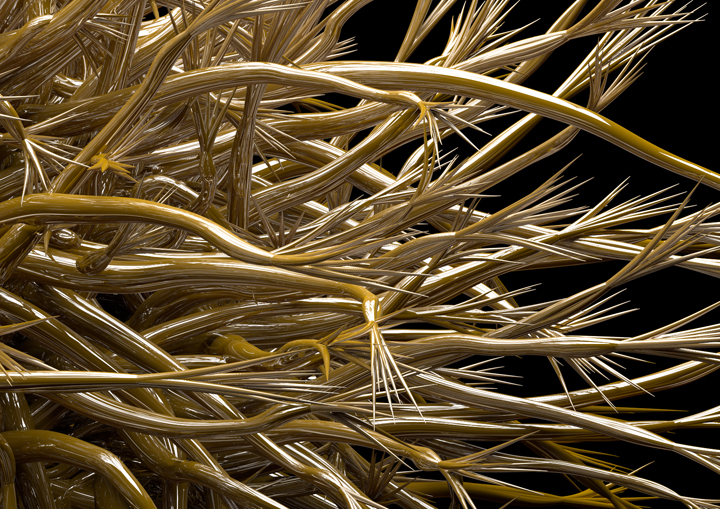 Another major development was the redesigning of the website to make it responsive and also allow for full screen viewing of the images. I hope you like it.

I am now well on the way to completing the alphabetic characters A to Z for the 36daysoftype challenge. Results will be posted below as they become available. You can also see them on my Facebook and Instagram pages where comments are most welcome.

I have just completed the digits zero through nine for the 36daysoftype challenge. I've been missing these quick-fire model and render exercises so this was a welcome indulgence. You can see the results of my efforts below and also on my Facebook and Instagram pages.

In September 2013 I was asked to join with some friends to do a photo-a-day challenge where each day I would be expected to post a picture, based on a previously decided theme per day. I decided, for various reasons, to do something different and try to create a Blender scene each day with the rendered image linked in some way to the day's theme. Twelve months later I have posted 365 images of scenes modelled in Blender and rendered using Cycles.

Over the intervening period I have been asked by several people what am I doing, why am I doing it and have there been any benefits.

I am a firm believer that life is an education and that we never stop learning. What seems to happen is that the rate at which we learn new things varies depending upon our need and determination at different moments in time. Invariably, learning new skills with very loose aims can be a slow process. In my experience learning while trying to solve a problem or with a well defined objective appears to commit the new material more firmly than without either of those things.

When I started this project I was twelve months into learning to use Blender and had just decided to make the switch from the Blender Internal renderer to using Cycles, so lots of new stuff to learn. I also realised that I had a comfort zone which was probably only covering about 15-20% of the functionality Blender had to offer. I decided that I needed to get out of this zone, develop a wider set of skills covering more of the features of Blender and try some more ambitious scenes. The photo-a-day idea seemed perfect as a way of pushing me down that road. I decided on a few rules for consistency and also so that I could retain some of my sanity during this period. All the scenes would be rendered at 1920x1080; average time spent working on a scene (excluding rendering) would be two hours; photographs are allowed as HDRi images, backdrops or textures; assets created in one scene could be reused in a later scene. All that was fine, but in practice over time the two hour rule became a little fuzzy, I would say that the time varied between 1 hour and about 12 hours for some scenes - if I had the time. Also, as I did most of this work in the evenings, overnight renders happened quite frequently.

So what did I learn? Quite a lot in fact.


Any downside? Of course there were some difficulties. Time management was probably my biggest issue - trying to have images ready each day to post and still have a "normal" work and home life was occasionally difficult. Days when I was away from home and my computer meant I had to stockpile a few images beforehand. Also, towards the end of the year as I was setting more ambitious goals for each of the day's themes I felt that the time constraints meant I wasn't able to create the scenes that I would have liked.

For anyone thinking of doing something along these lines then there are two aspects of this that I can recommend - the first is to create something and post it to the web on a regular basis. If you do this in the right forums it will get people's attention, make you friends and get you feedback. A picture a day is quite a tall order and might be difficult for some to fit into their hectic lives, once every week or two though would still be beneficial. Be consistent though. The second is to use a brief, or subject matter, that you don't decide yourself. In my early work I chose what I did and it is pretty obvious I just stayed within my comfort zone repeatedly using the same skill set. The picture a day themes definitely made a difference. They developed my ability to be creative, research ideas, made me more resourceful and change the way I looked at the world. For example, now, whenever I go out on a trip with my camera, I'm also looking to take pictures of textures I can add to my library.

My conclusion is that it was a worthwhile project. It served its purpose, which for me as an independent developer and artist meant I had some staff development, something that was lacking from my earlier solo career. I have learned a lot. In addition, I now have the basis of a portfolio and a body of work to show potential clients. I am very glad I did it but now I'm ready to move on to larger projects.

Bart Veldhuizen from BlenderNation noticed my #renderaday posts on Twitter and invited me to do an interview. First, he asked me to write a little about myself and what I was doing. Below is the email I sent in response. Bart decided to use it virtually unaltered, but with some small edits, for the article.

Recently, I noticed a steady stream of Blender artwork on Twitter by Paul McManus, tagged #renderaday. I was intrigued and asked him to tell a bit more about this project.

Hey Paul, could you introduce yourself to the Blender community?

I'm Paul McManus and I'm a Software Engineer and Digital Artist. My interest in producing 3D digital art goes back many years. In the 1980s I wrote a planar facet modeller and ray trace renderer that were used by Interior and Product Design students at Teesside Polytechnic where I was doing postgraduate work. Around the same time I did some work with Fred Baier, a pioneering furniture designer. We worked on quite a few designs, and Fred used them to make several pieces over the years to follow. One of them, The Prism Chair, is now in the permanent collections of the V&A Museum in London and two more in the USA.

In later years the focus of my software was more on the web rather than the desktop. This required more visual entities than previously and so I decided to start making my own. I started with my own software but quickly came to realise that there were better programs out there for this kind of work. My first port of call was POVRay. I used this for quite some time. It was great for producing small visuals, glass effects, button caps and so on.

How did you discover Blender?

All my computer graphics work until this point had been still images. A couple of years ago I was asked about doing some animation to support a web site sales initiative. The problem: (as always) there wasn't a lot of time to do it in! My other problem was that I didn't have any software to do the work in other than POVRay. A little Googling pointed me to Maya, 3DSMAX and Blender. The first two were discounted because of the cost verses the income potential of the project. That left Blender, which on first opening revealed a mysterious UI - nothing I did appeared to do anything useful. Of course, I'd not read any documentation. Blender was rejected on the basis of a 15 minute test drive and I went out looking for other software that might work for me. A few days later the project was shelved.

A little while later, around mid 2012, I had a need for some animated GIFs and some more ambitions graphics for a web project. I uncovered some great work on Blender Nation, CG Society and deviantArt that gave me new motivation to see what Blender could do for me. This time I read the documentation. Most of the work was straightforward and not very challenging once I'd got the hang of the UI.

A turning point in my use of Blender came in early 2013 when my old desktop PC died and needed to be replaced. I was lucky enough to get one of the first Titan graphics cards in my new machine plus lots of memory and a fast processor. This all made Blender a dream to use.

A year in and it was becoming obvious that Blender is huge. A lot of the features I'd not even tried out in roughly 12 months of use. I was doing the typical thing of only using the same 20-30% of features I'd learned early on, over and over. I'm a firm believer that learning as part of solving a problem is more effective than trying to learn something when there is no specific need. The day-to-day work was not really presenting any significant demands to take me out of my comfort.

How did the #renderaday project come to be?

In September 2013, a family member invited me to sign up for the photo-a-day challenge on the http://fatmumslim.com.au website. The idea is that for each day there is a word or phrase for which you have to post a picture. I'm a keen photographer and that seemed like fun so I agreed. As October approached I decided that it would be more interesting if I could post a picture produced using Blender. I knew this would be a real challenge. I also knew it would force me to learn some new tricks. It's now five months and I've managed to do this every day. Some days have been more difficult than others. The main thing is I've learned a lot - and I'm still learning. Most of the pictures are very simple scenes, what's important is that my workflow and work patterns are getting refined so that I can produce stuff fairly quickly. Weekends allow for a little more indulgence and so I try and do something more demanding then.

There is still a lot more to learn. My current learning centres on Python and Blender scripting for some low-poly game asset creation.


The original article is posted here on the BlenderNation website